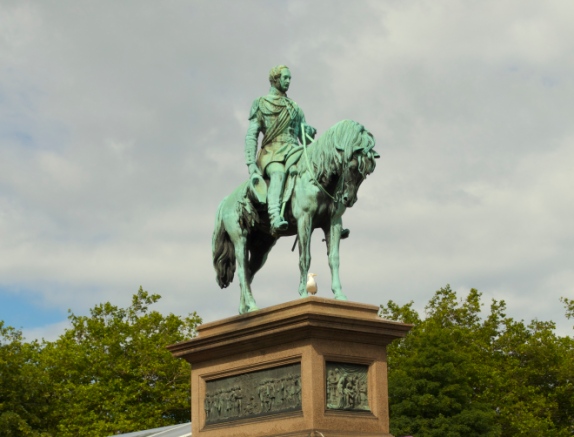 Yesterday I started my spree of book festival attendance with Ali Smith delivering the PEN/HG Wells Lecture. It began with an introduction from Nick Barley, the director of the festival, who spoke of a Nazi book burning on the 10th of May 1933. Anything that was considered un-German went into the flames and a few weeks later a German author spoke up about the event and the oppression of Jewish writers at a PEN conference in Italy. The organisation exists to fight for human rights and freedom of expression and their motto is that everyone should have both the freedom to write and the freedom to read. However the German branch of PEN was not supporting the writers being excluded and oppressed. They were instead supporting Nazi policy and as a result HG Wells, who was the president at that time, had them expelled.

Then Ali Smith stood up to speak with a quick warning that she would go extremely fast and a joke that she didn’t mind if someone fell asleep. When she launched into her speech it became clear that fast was an understatement and no one would be falling asleep. She danced around topics that all linked into a greater theme, with tangents shooting across the tent at alarmingly regular intervals without ever losing relevance or becoming confused.

She spoke of knowing a great deal about the life of HG Wells and his politics and love affairs without having actually read a great deal of his work, something she set out to remedy while wondering exactly what to say in yesterday’s lecture. She went to a play in London that was about clones, where her ticket had no seat indication, just the number 103. While in the theatre’s café before the start she was distracted from reading the Wells book she’d brought along by the couple at the next table. The girl sat nodding and looking interested while the guy talked at length about his Watch and the many virtuous things its screen could display about his day. Apparently it was vital for his date to be impressed by the fact that he had stood, rather than sat or walked, for an average 3 minutes and 41 seconds each hour.

Once home Smith distracted herself from Wells once again by wondering about watches, when watches had become chat up aids and the etymology of the word watch (among other things it is the collective noun for a flock of Nightingales). The news was on TV and she thought of the ‘swarms’ of migrants, always described as numbers rather than people, like the number on her ticket for the play. A number doesn’t require empathy; it doesn’t have a future or a face, it simply is.

A few weeks later Smith sat in a friend’s car and pondered the facelessness described in The Invisible Man, while her friend took photographs of faceless saints in the church they had parked beside. Wells had been interested in a wide range of political ideals in his time, eugenics among them, his ideas shifting and maturing as he aged and the world changed. The idea of ‘lesser people’, and the need to eradicate them, that was encapsulated in eugenics is not dead; it simply changes its face and rears its head again and again. The impression of a faceless swarm and the attempts to scrap the Human Rights Act are only the most recent façade.

Smith spoke of how Wells was entranced by what could be and impatient with his present, despite being rather pessimistic about the future. He foretold an astonishing range of things: tanks, space travel, mass surveillance, the EU, global warming, the atomic bomb, ID cards, cosmetic surgery, rampant capitalism, the internet, the list goes on. He was also a great believer in universal human rights. Aside from his visionary classics he helped form and sustain PEN and Liberty and advocated for an international bill of human rights. His writings, The Rights of Man among them, were a profound influence on the later writing of the International Declaration of Human Rights.

Throughout Smith’s tone was one of despair at the xenophobia streaming out of our current government and media, the importance of universal human rights and universal support for them, and awe at the visionary who predicted so many later events with such devastating accuracy.

This site uses Akismet to reduce spam. Learn how your comment data is processed.