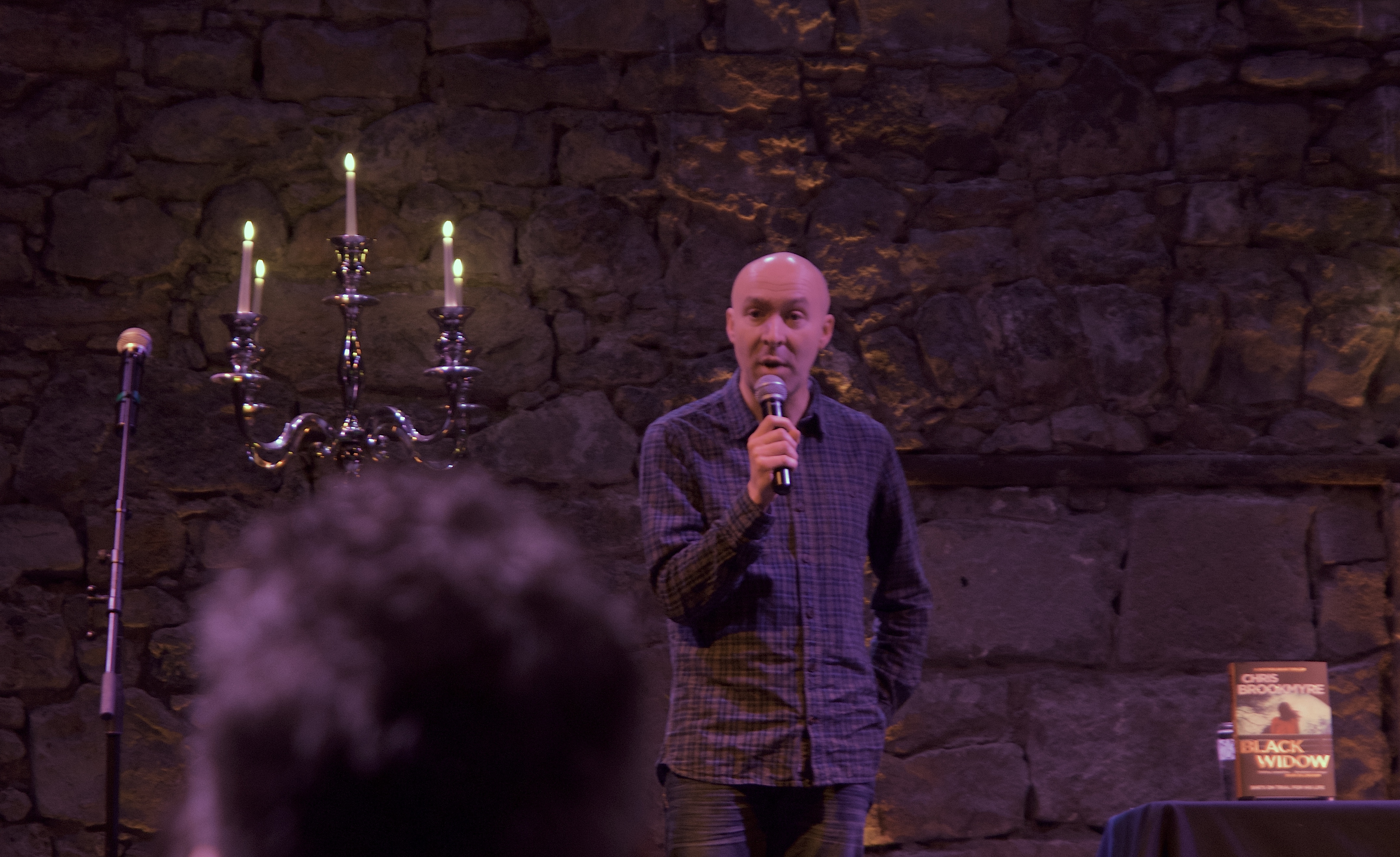 Over the last few years Blackwells have apparently lured Chris Brookmyre to do several events in Edinburgh by promising to book The Caves for the event. It’s easy to see why. Set up in one of the high arches under South Bridge the venue is lit to emphasise the rising stonework and the walled up doorways near the ceiling that show its long history. The introduction of Brookmyre includes a joke that we won’t be asked to turn off our mobile phones, as there is no signal. There is a bar upstairs but even there getting card payments to work took effort. It’s an unusual and atmospheric venue that perfectly suits Brookmyre and his stage presence.

Brookmyre begins by stating that he is very excited, more so than normal, as he considers Black Widow (out next week) to be one of his best. Critics have been loving it and declaring it a work of feminist crime fiction. He is glad they have stated that for him as he feels that it is too easy for a man to lay it on too thick when discussing feminism. He worries not just about sounding patronising but that he might risk making being female sound like a disability.

“Carol changes her clothes up to five times before leaving the house, just £2 a month from you can help her.”

A laugh from the audience encourages him as he continues, commenting on women being declared ‘too sensitive’ and joking that men are so well known for their proportional response to feminism.

From the section of Black Widow he reads, and his further comments on the book, it appears that the stereotypes surrounding men, women, and feminism are key to the story. The book begins with the thoughts of Diana Jaeger as she sits in her trial for murder. She contemplates the fact that she knows the jury have already decided she is a monster, the media have made that clear. She feels indignant at the air of ‘how dare she?’ which echoes through the media coverage. As she points out, no one ever asks ‘how dare he?’. A man killing his wife results in discussions of the ‘tragic’ situation and wanders into victim blaming. Articles on wives killing their husbands never stray into “He must have known her triggers.”

Long before her marriage, crime, and trial, Diana Jaeger was the anonymous author of a blog about sexism among surgeons in the UK. Her moniker Scalpel Girl is predictably perverted into Blade Bitch when the blog goes viral. She writes about the comments female surgeons get and how easy it is to ignore the constant background hum of harassment and forget its dangers. Another entry discusses jibes about female surgeons having too much or too little cleavage for the job, before musing that perhaps the Royal College of Surgeons should provide a definition of the ‘ideal standard career tit’, to be used as a template for appropriate surgical intervention. The blog inevitably results in the rape and death threats “we have come to expect” and the comment sections fill with the “full bullshit bingo card”, echoing the saying that the response to any article on feminism, justifies feminism.

It seems as though Brookmyre has taken everything we feel resigned to accept as normal about sexism and feminism, both online and off, and written it into a narrative in a style that strips away any wool that has gathered to make it dance and emphasise it’s appalling nature. During the questions he says that he finds passions to carry him through books, often things he passionately hates, and likes to write fiction that engages with society. In Black Widow he has taken a subject that inspires ranting in almost everyone and transformed it into a gripping tale, which will undoubtedly inspire further ranting.

The questions session is a reminder that while Black Widow is a crime novel about a fairly serious topic, Brookmyre is also engaging and funny, both in writing and in person. He puts everyone at ease by describing the worst question he’s ever received at a book event, to reassure us that we can’t do worse. He was apparently doing a signing in Costco in Swinbourne, sat on a chair that had still been flat packed minutes before his arrival. He was at a table piled with his books and surrounded by posters, most of which had his face on them. An old man still managed to walk up to him, lean round the books and say “’Scuse me, you got a gardening department?”

One audience member asks about getting the perspective right for writing from the point of view of a woman. Brookmyre explains that he was never a laddish boy and never identified with the idea of being macho. As such he finds writing women easier than an SAS hyper-masculine type. He adds that growing up around opinionated women probably helped, and that being Scottish “They didn’t miss and hit the wall when talking to you.”

He segues into an anecdote about a woman who emailed him objecting to his use of the word c*nt in Bedlam, declaring that she’d read all his previous work and couldn’t understand him using this to ‘jush up’ his writing. His reply, after a search of previous books, was that he had used it previously, in fact he stated that he would love to know how she failed to be offended by the 250 previous appearances of c*nt in his books, 65 of which appeared clustered together in Tale Etched in Blood.

Other questions focus on the changing world of publishing and the difficulty in translating work that is very much Tartan Brand. Brookmyre feels that a good editor is key in publishing but that the entire industry has become much more prone to micromanagement in recent years, even fussing about titles in a way that they didn’t before. He thinks this might change soon as they’re beginning to relax after a bounce back from the blows of Kindle. He is lucky in that he has worked with Orbit as well, and so is able to switch to writing Science Fiction without too much trouble, which he will be doing when he’s finished the next crime novel. Translating Tartan Noire is a different question and he explains that it’s done with difficulty and sometimes badly. To a certain extent it’s less about the language barrier and more about the culture. His books sell where people can identify with them.

Brookmyre ends by reading a short story he was asked to write as part of the celebrations surrounding the Commonwealth Games in Glasgow. The brief was to write a story inspired by the Kelvingrove Bandstand and his resulting work was titled “Puck Knows”. It features a crowd arriving to watch a production of A Midsummer Night’s Dream. Among the crowd are a reluctant group of teenagers, whose comments about how Shakespeare is “Like f*ckin’ Cbeebies, ‘cept it makes less sense” go unchecked as the teachers sensibly chose the seats furthest from the students most likely to ruin their night. Despite sounding like typical troublemakers they do initially pay enough attention to pick up on all the dirty jokes their teachers can’t or won’t cover, making dirty comments in return.

The continuing story had us all roaring with laughter every few lines as it proved to be both brilliantly Shakespearean and utterly Glaswegian. Brookmyre was, as always, hilarious, clever, and entertaining. Interestingly, while crime fiction events often result in a largely female audience, Brookmyre attracted one that was predominantly male, all of who seemed to be thoroughly enjoying themselves and his jokes. It was a fitting reflection of Black Widow’s use of gender stereotypes and the realities they ignore.

In an evening filled with clever jokes and plays on words, the organiser’s final remark that Black Widow would make an excellent wedding present seemed an appropriate way to end.

This site uses Akismet to reduce spam. Learn how your comment data is processed.